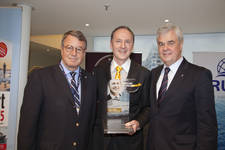 Hapag-Lloyd Cruises received three special distinctions in a row at the ITB. On 6 March 2015, Hamburg Tourismus GmbH presented the "Hamburg Cruise Personality" award for the fifth time, this time to Karl J. Pojer. Pojer has been the Chief Executive Officer of Hapag-Lloyd Cruises, Germany's leading provider of luxury and expedition cruises, since May 2013.

A jury of 12, whose members included representatives of shipping companies which call at Hamburg, chose the winner and gave the following reasons for its decision: "Karl J. Pojer sparked the turnaround at Hapag-Lloyd Cruises, strengthened its position in the luxury segment and, by acquiring the EUROPA 2, paved the way for a multi-award-winning traditional Hamburg seafaring brand to enjoy a highly promising future in Hamburg."

On the previous evening, Hapag-Lloyd Cruises also received the "Best Cruise Liner of the Year" award for the EUROPA 2 from the magazine HIDEAWAYS. As it presented the prestigious "Hideaway of the Year" award, one of the most coveted prizes in the luxury hotel sector, the exclusive travel magazine also awarded a prize for the best cruise ship of the year for the first time, as voted for by the readers of the magazine. "With its exclusive yet casual lifestyle concept, the EUROPA 2 immediately opened up new target groups for contemporary cruises. Therefore, its recognition as the best cruise liner of the year does not really come as a surprise", said the magazine about its decision.

The readers of the travel magazine Traveller's World also made their voices heard and selected the best in the cruise sector in ten different categories, which were then recognised at the Traveller's World Awards 2015 at the ITB. The EUROPA 2 came in first place in the ten best cruise ships and was therefore the winner of the category. Its sister ship MS EUROPA came in fourth place.

"I am immensely happy to receive three extraordinary prizes in a row. I am truly honoured to have been named the Hamburg Cruise Personality. It is a great compliment for me and the work I have done with my team", said Karl J. Pojer at the ITB in Berlin on Friday.