The stage is set: Circus Roncalli on board EUROPA 2

Circus Roncalli will become the first European circus to perform on two EUROPA 2 summer cruises this year, showing its innovation as a pioneer of the circus industry once more. Guests on the luxury ship can enjoy circus acts seemingly straight from a book of fairy tales. With nostalgic costumes, astounding acrobatics and juggling from an enchanting world behind the scenes, the hand-picked artists of the most wonderful circus in Europe perform in one creative programme and show the modern aspects of the art, while in a traditional setting. 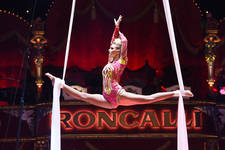 Guests on the EUROPA 2 cruises during which Circus Roncalli will perform can view two different shows in the ship’s theatre as part of the evening programme. One performance centres on traditional elements of Circus Roncalli’s repertoire and the other focuses on a modern interpretation of the circus arts. Circus Roncalli has been dazzling audiences for 40 years, never failing to combine nostalgia and modernity into a single work of art – and will now enthral guests on the EUROPA 2.

The circus, directed by Bernhard Paul, will be on board on the following cruises. Both cruises on the EUROPA 2 are already fully booked: