In the 2016/2017 cruise season, guests on board the EUROPA 2 can expect a range of exciting events, attractive cruise formats and premiere destinations. Guests can expect new exotic stops in Oceania, include Fiji, New Zealand and Australia. Also new on board, fashion2sea brings famous designers and their collections to guests on the ship, and the fitness area will have a new sports programme designed by Olympic champion Maria Höfl-Riesch. 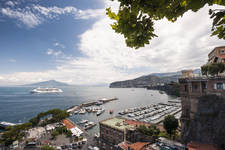 BE.YOU is the name of the new on-board fitness programme developed exclusively for the EUROPA 2 by skiing star Maria Höfl-Riesch. The programme includes a personal body analysis, the results of which will be used to devise an individual training and nutritional programme for participants. Germany’s most successful Winter Olympian Maria Höfl-Riesch will join two cruises in May and November 2016, and will train alongside the guests.

fashion2sea will focus on fashion and style, with famous designers presenting their collections on board. There will be fashion shows, a pop-up-store, make-up workshops, and fashionable shore excursions during these cruises.

On the art2sea cruise, art will not only be exhibited on board; major events at the destinations will also prove fascinating for art lovers, with highlights including exhibitions in Boston and New York. Popular artists will also be there to provide an exciting look behind the scenes of the international art world. On the EUROPA 2, art lovers and connoisseurs can discover a range of various artworks in the public areas and suites. There are 890 originals on board in total, some of which were created as part of extra contract work for the EUROPA 2. The collection features works by Gerhard Richter, Ólafur Elíasson, David Hockney, Damien Hirst, Adam Fuss and Hans Hartung. This exclusive list is complemented by works by Jeppe Hein, Georg Küttinger, Ingrid von Kruse, Eva Hild, Minjung Kim, Cornelius Völker, Rupprecht Mathies, Kubach & Kropp, Tenka Gammelgaard, Christiane Baumgartner and Christian Schoppe.

For the first time, the EUROPA 2 will be visiting Oceania. In December 2016, passengers can fulfil their South Sea dreams when the EUROPA 2 drops anchor off the coast of Fiji and New Caledonia. From there, the ship will continue to New Zealand and Australia, with stops in Auckland, Wellington, Burnie, Adelaide, Melbourne, Brisbane, Middle and Hamilton Island and of course, Sydney. New ports also include Taiwan, Thailand and Cuba with stops in Santiago de Cuba, Cienfuegos, Isla de la Juventud and the capital, Havana. In the far north, the new route leads from Greenland to Canada in August and September 2016, with stops in Nuuk/Greenland and Sisimiut/Greenland and cruising in Disko Bay/Greenland, St. John’s/Newfoundland/Canada, Saguenay (La Baie)/Canada, Quebec/Canada and Montreal/Canada. In September 2016, the itinerary for two North American cruises take in fascinating destinations such as New York, Boston, Cape Cod, Charleston (South Carolina), Miami, Key West and New Orleans.

A surprise cruise on the EUROPA 2

In May 2016, the EUROPA 2 will set out on its first surprise cruise. Only the start and end ports (Istanbul to Piraeus) will be revealed to passengers – where the ship stops along the route will be decided by the guests and captain, during the cruise.