Protecting the environment: the Zodiacs aboard HANSEATIC and BREMEN are being equipped with Torqeedo electric motors

For guests on Hapag-Lloyd Cruises’ expedition ships HANSEATIC and BREMEN, the unforgettable experience of taking the Zodiacs into pristine, remote regions will now be even more exhilarating, as well as environmentally-friendly. Gradually, parts of the expedition- suitable zodiac fleet on board both expedition ships have been equipped with eco-friendly “Deep Blue” electric motors, produced by the German manufacturer Torqeedo. This will make Hapag-Lloyd Cruises the first cruise operator to use this “green” technology on expedition cruises. 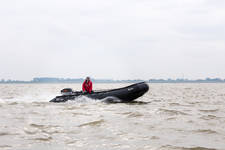 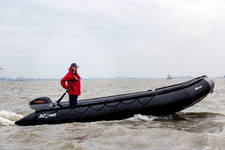 The Zodiacs (motor-driven rubber boats) are the “secret weapons” of expedition ships HANSEATIC and BREMEN: in the most exotic and remote regions on the planet, such as the Amazon, or Antarctic, they make it possible for guests to land in otherwise inaccessible areas. After a one-year pilot phase in which the electric motors were tested on Zodiacs on board the HANSEATIC and BREMEN, parts of the rubber boats of both ships were equipped, bit by bit, with these new and 80 horse-power strong “Deep Blue” electric motors from Torqeedo in Starnberg/Germany.

“For years the ships of Hapag-Lloyd Cruises have used low-emissions marine gasoil in fragile cruising areas such as the Arctic and Antarctic. Equipping our expedition Zodiacs with electric motors represents another investment in the future of our environment. With their flora and fauna, our cruise destinations are key to the appeal of our itineraries and we want to protect what fascinates us,” explains Karl J. Pojer, CEO of Hapag-Lloyd Cruises.

Torqeedo’s “Deep Blue” is an electric propulsion system with a previously unseen level of output. In Hapag-Lloyd Cruises, we are very happy to have found a highly-respected partner that will take on a pioneering role and implement our technology on the rubber boats it uses for expeditions,” says Dr Christoph Ballin, CEO of Torqeedo. As a full propulsion system, “Deep Blue” features an electric motor and all other components required to propel the boat – from the lithium battery to the on-board computer. Unlike outboards with combustion motors, electric propulsion systems do not release any emissions, or harmful substances into the water. This will help to protect the vulnerable waters in which excursions take place. Therefore, guests can enjoy more thrilling landings as the new motors cause no smells and are considerably quieter than the Zodiacs’ previous 36 horse-powered motors.

Additionally, the principle of slow steaming is applied as part of vessel management. This means that itineraries are calculated using an environmentally-sound average speed, which can cut fuel consumption by around one third. This is currently one of the most effective and best ways to reduce consumption and hence emissions.

In the German-speaking regions, Hapag-Lloyd Cruises is one of the leading providers of luxury and expedition cruises. There are four ships in the fleet. The EUROPA and EUROPA 2 both offer pure luxury – and they are the only ships in the world to have been awarded the prestigious 5-stars-plus ranking by the Berlitz Cruise Guide 2016. The HANSEATIC (5-stars*) and BREMEN (4-stars-plus*) cruise ships offer passengers expedition experiences in every part of the world. A further option in Hapag-Lloyd Cruises’ portfolio is extraordinary experiences aboard the company’s luxurious private jet, the ALBERT BALLIN, which is a particularly exclusive way to travel. The EUROPA 2 is operated fully bilingual, on-board language is both German and English. Selected cruises on board HANSEATIC are operated in German and English.

* According to the Berlitz Cruise Guide 2016.

Established in 2005, Torqeedo is the global market leader in electric mobility for boats. The company has sold 50,000 high-tech propulsion systems with outputs ranging from 1 to 80 h.p. The propulsion systems are used in domestic waters as well as by sailors, speedboat drivers and commercial users around the world. The company was awarded the prestigious Deutscher Gründerpreis for new businesses in 2007.