During its second scheduled docking period since its launch in 2013 at Blohm + Voss in Hamburg from 13 to 27 September 2017, the look, technology and concept of Hapag-Lloyd Cruises’ ship MS EUROPA 2 have been updated. This has included redesigning the Belvedere lounge on Deck 9 and the Herrenzimmer bar on Deck 4. The Spa area has also received its own beauty treatment. The full list of changes comprises approximately 1,000 points. 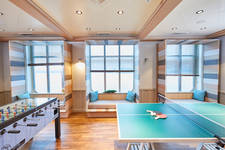 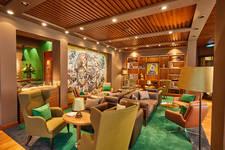 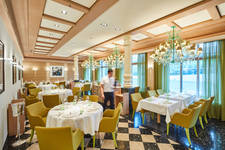 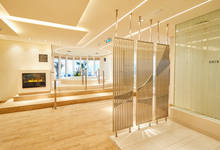 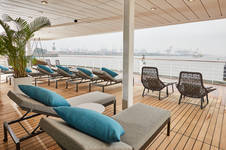 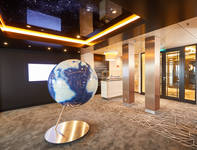 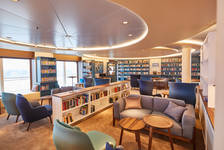 During the last 14 days, around 550 external specialists and 370 crew members have worked on conceptual changes, cosmetic repairs, maintenance tasks and structural elements. In total, the craftsmen laid 4,000 square metres (43,055 square feet) of new carpet and used 5,000 litres (1,099 gallons) of paint.

This extensive work focused on tasks such as modernising Deck 9. The Belvedere has been given a completely different “look” with new furniture, colours and materials. This lounge at the ship’s bow has been transformed into a coffee bar. A newly-integrated library will now provide another comfortable spot. The former Library – also on Deck 9 – is now home to the new Cruise Sales Lounge, with an ocean view, where guests can book their next dream cruise.

One particular highlight is the new, small EUROPA 2 museum, which is located in the waiting area of the Cruise Sales Lounge. Numerous display cases feature special pieces from the short history of the luxury ship, including a model of the EUROPA 2, a replica of the keel-laying coin and much more. The auditorium on the same deck has also been redesigned. The new studio will be used for workshops, talks and cinema viewings. Yoga classes can also be held here with a view of the ocean.

The most extensive construction work took place in the Spa area on Deck 5: all four saunas have been renovated and given a new concept. There is now a Finnish sauna heated to up to 90 C, a revitalising Deep Ocean sauna heated to 55 C and a mineral steam bath heated to 45 C and with up to 100 % humidity. In the low-temperature herbal sauna, heated to 65°C, the Black Forest-inspired décor creates a relaxing atmosphere. The Spa area now features a lounge corner with a fireplace (electric) and new lounge furniture has been added to the outdoor area.

Deck 4 of the EUROPA 2 is filled entirely with public areas such as the speciality restaurants and bars. The popular Herrenzimmer gin bar has been given a “new look” and renamed Collins. In addition to the largest gin collection at sea, now extended to 45 varieties, visitors will be able to select records and use the new record player themselves. A piece of art by Hamburg duo Sutosuto forms the centrepiece of the room. After a long period of planning and preparation, the portrait of Albert Ballin was created in the dockyard. Opposite the Collins bar is the former Jazz Club, which has been renamed Club 2. New seating has also been added to the Italian restaurant Serenissima. The Teens’ Club has moved from Deck 7 to Deck 4 to make the teens’ space even more private. The former private dining room Speisezimmer has been transformed into a large, relaxing lounge area with cosy alcoves, games consoles and much more. The route to the new Teens’ Club is indicated by the impressive graffiti work of Hamburg-based artist Lady Wave.

After leaving the shipyard, the 5-stars-plus* EUROPA 2 will first sail from Hamburg through the Kiel Canal to Oslo and Gothenburg and back to Hamburg.

* according to the 2018 Berlitz Cruising & Cruise Ships guide