In celebration of the 125th anniversary of cruising: Hapag-Lloyd Cruises rejuvenates its company logo

The year 2016 is a special one for Hapag-Lloyd Cruises: for the Germany-based company, the 125th anniversary of the first pleasure cruise at sea is the perfect time to implement a few significant changes. From now on, the company will operate completely under its international name, Hapag-Lloyd Cruises. Since its founding, the renowned cruise operator of luxury and expedition cruises has been marketed as ‘Hapag-Lloyd Kreuzfahrten’ in its German-speaking markets. The company logo, therefore, will also be redesigned. Additionally, the anniversary year will feature a brand campaign entitled “The story begins right here”. 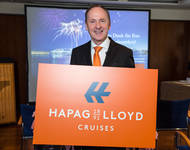 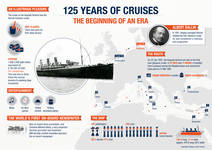 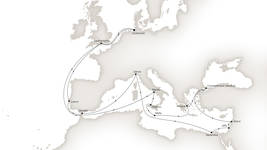 Hapag-Lloyd Cruises is celebrating the anniversary of the first pleasure cruise at sea, which set out in 1891 after Albert Ballin had the inspired idea of a pleasure cruise on the Mediterranean. In future, the Hamburg-based cruise provider will be operating under the new name. “We are changing our company name from Hapag-Lloyd Kreuzfahrten to Hapag-Lloyd Cruises,” says CEO Karl J. Pojer. “This international variant can be understood in the global marketplace and is more attractive to a modern, international target group with its cosmopolitan feel.”

Besides modernising the famous symbol to have a slimmer, more elegant silhouette, the new logo features the year 1891. This reference to the year in which the first cruise took place symbolises the history and expertise of the company. Additionally, the colours in the logo have been updated to elegant, darker shades of orange and blue.

“We are proud of the long history of our company and remain committed to the innovative, pioneering spirit of Albert Ballin. Our goal was to use the anniversary as an occasion to make some major changes,” says Karl J. Pojer. “With our new name and corporate logo, we are moving with the times and are adapting to the needs and desires of a modern, international community.”

Brand campaign
A brand campaign entitled “The story begins right here” is also being launched to mark the 125th anniversary. Even now, major and minor new chapters in cruise history are being written daily. The campaign features a series of exciting stories about Hapag-Lloyd Cruises and the development of ‘the cruise’ and will be the common denominator for a range of different initiatives.

These stories will be told on the landing page at www.since-1891.com and will provide personal insights into the world of luxury cruises. A range of advertisements will refer users to the website. There will also be a booking incentive for customers: valid for 125 days commencing 22 January 2016, there will be a 12.5 per cent discount offered on selected cruises. Travel trade sales partners will also benefit from the anniversary. As part of a booking competition, the travel agency that generates the 125th booking will win a voyage on board one of the Hapag-Lloyd Cruises’ ships.