Hapag-Lloyd Cruises is set to add another expedition ship to its fleet. TUI Group, the world’s number one tourism group, will invest in another new-build for its Hamburg-based subsidiary Hapag-Lloyd Cruises. On the 2nd of July 2018, the management of the Hamburg-based cruise company signed a contract for another ship with the Norwegian VARD shipyard. The new expedition ship will be called the HANSEATIC spirit and will launch in the second quarter of 2021 as the fleet’s first ‘adults-only’ ship. Before this, the company will add two more expedition ships to its fleet in the form of the HANSEATIC nature (spring 2019) and HANSEATIC inspiration (autumn 2019). The parties involved have agreed not to disclose the financial details. 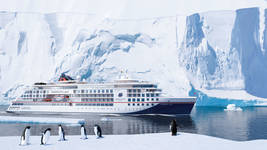 Karl J. Pojer, CEO of Hapag-Lloyd Cruises, said: “Our expedition segment is already a success and offers potential for growth in the 5-star segment that we want to harness with these three new ships. With the new ships, we are launching a new expedition class and strengthening our leading position in this segment. By investing in the new Hapag-Lloyd Cruises’ ships, the TUI Group is underlining its strategy for this cruise segment and the importance of our luxury brand to the group portfolio.”

The structurally-identical expedition ships will be built in the Norwegian VARD shipyard of Vard Holdings Limited, which is a subsidiary of the Italian shipbuilding company Fincantieri. The new ships will be fitted with cutting-edge equipment and environmental technology. They will also have the highest ice class for passenger ships (PC6), meaning that they will be positioned in the polar regions (the Arctic and Antarctic), as well as in warmer destinations such as the Amazon region. The on-board Zodiacs will make it possible to land in expedition areas that do not have ports, and there will be a marina for water sports.

Further information on the new ship: