Hapag-Lloyd Cruises is putting its trust in the strong HANSEATIC brand name and has named the two new ships in its 5-star expedition segment ‘HANSEATIC nature’ and ‘HANSEATIC inspiration’. The company unveiled the names of the two, new members of the fleet and released various other details at a press conference held today at ITB Berlin. The expedition ships, which are planned to launch in April and October 2019, respectively, are an investment by the TUI Group on behalf of its Hamburg-based subsidiary. In terms of its growth strategy, the world’s largest tourism group is increasingly focusing on its own hotels and cruise ships. The new expedition ships – both of which feature an identical construction – will each accommodate up to 230 passengers (or up to 199 passengers on Antarctic expeditions). Alongside the highest ice class for passenger ships, they each boast three restaurants and an extensive wellness and fitness area. There is also a marina for water sports. 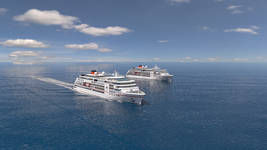 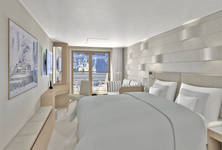 Karl J. Pojer, CEO of Hapag-Lloyd Cruises, said: “The potential in the expedition ship segment is more than three times higher than supply. By virtue of the comfort and luxuriousness of our state-of-the-art new vessels, we will appeal to even more customers in the luxury segment in future. At the same time, authentic, natural spectacles that convey the feeling of a personal expedition have always been the basis for our decision-making. With our choice of names, we are continuing the success story of today’s HANSEATIC – the only 5-star expedition ship* – retaining the popular and well-known brand name and establishing a new and separate class within our fleet.”

The design concept, “inspired by nature”, reflects the expeditionary spirit and is the creative idea underpinning both ships. Nature is not only experienced outside, but also is reflected in the interior design. This comes to the fore in the choice of materials, colours and forms, as well as in the contours and lines of walls and surfaces, the lines of sight and therefore the interplay between the interiors and the world outside.

The on-board design highlights include the two extendible glass balconies. Passengers standing on these balconies can experience the unique feeling of floating over the ocean. The all-round deck in the upper deck forward (bow) ensures a genuine expeditionary feeling. Here, passengers can experience the action at close quarters – closer even than the captain. This contributes to the expeditionary character, especially when the ships embark on journeys to the Arctic, Antarctic, or Amazon.

HANSEATIC nature and HANSEATIC inspiration have been fitted with cutting-edge equipment and environmental technology. In a highly complex process, the hulls of the two ships have been optimised to achieve the maximum reduction in fuel consumption for the propulsion system and cut overall bunker consumption. The new vessels are fitted with an SCR catalytic converter, which reduces nitrogen oxide emissions by almost 95 per cent. Additionally, each of the two ships features a PROMAS rudder with a special propeller. This also helps reduce fuel consumption and therefore lower emissions. The IR ice detectors are a further highlight, with the infrared camera making it possible to spot ice at night and in misty conditions. Cold ironing is also envisioned.

The new expedition ships are being built by Norwegian company Vard Holdings Limited, which is a subsidiary of the Italian Fincantieri Marine Group. The current and successful route concept, which focuses on untouched and unspoilt regions, will be continued and expanded. PC6, the highest ice class for passenger ships, makes it possible to conduct expeditions far into Polar waters, with tropical destinations such as the South Seas and the Amazon remaining on the itinerary. 16 on-board Zodiacs and E-Zodiacs with eco-friendly electric drive systems allow for landings in remote expedition areas, regardless of the vicinity to a port.

*according to the Berlitz Cruise Guide 2017