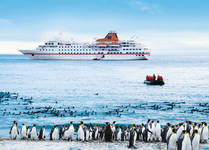 “We are preparing our fleet for the future with our two new expedition ships. We are very happy to have largely bridged the gap before the launch of the first ship, by extending our charter for the HANSEATIC. This is the best decision in terms of both cost-effectiveness and offering availability to our guests,” says Karl J. Pojer, CEO of Hapag-Lloyd Cruises.

Hapag-Lloyd Cruises will launch two new five-star expedition ships in April 2019 and October 2019. The two new ships are being built by the Norwegian shipyard VARD and will have the highest ice class for passenger ships (PC6). They will both accommodate up to 230 guests, and up to 199 guests on Antarctic cruises.