Hapag-Lloyd Cruises is publishing the route previews for its’ new expedition ship, the HANSEATIC inspiration. Guests can look forward to a multifaceted mixture of short and long cruises to nearby, and remote expedition regions. The preview also provides a first look inside the ship, including an introduction to the cabins and suites. The expedition vessel will also bear a new visual feature – a special exterior finish, a partly blue hull. The HANSEATIC inspiration will be an international ship, with all cruises conducted in both English and German. Launched only six months prior, in April 2019, its’ sister ship the HANSEATIC nature will cater to German-speaking guests with all cruises conducted in German only. 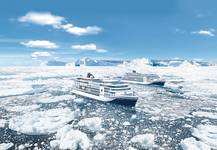 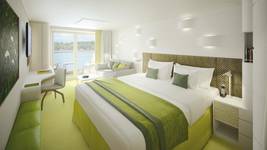 Diverse routes
Hapag-Lloyd Cruises’ two new expedition ships will both hold a Polar Class 6 (PC6), the highest ice class ranking for passenger ships. In addition to Arctic cruises in the European summer and expeditions to the Antarctic in the European winter, the HANSEATIC nature and HANSEATIC inspiration will set sail for the Amazon, the Chilean fjords, the Azores and Cape Verde. The cruises range from short four-day cruises to the Frisian Islands, to 20-day expedition trips to the Antarctic.

The maiden voyages
The maiden voyages of the two ships will be in Europe. On its 13-day maiden voyage, the HANSEATIC nature will sail from Hamburg to Lisbon in April 2019. Guests on the four subsequent nine-day cruises will also have the opportunity to get to know the new ship in European waters. The HANSEATIC inspiration will complete its maiden voyage from Antwerp to Tenerife in October 2019.

Six different types of suite and cabin
The preview provides potential guests with insight into the two ships, and an overview of the various types of suites and cabins: the 120 cabins and suites range from 22 m2 (236 ft2) for a Panorama Cabin to 71 m2 (764 ft2) for a Grand Suite. There are exclusively outside cabins on board the HANSEATIC nature and HANSEATIC inspiration, almost all of which feature their own balconies or a French balcony.

HANSEATIC nature and HANSEATIC inspiration: the new expedition class
The new small ships can accommodate up to 230 guests, or only 199 guests on Antarctic cruises. The almost identical ships raise the bar in the expeditionary cruise segment, and feature numerous structural elements that make the expeditionary experience even more intense. Retractable glass balconies give guests the feeling of hovering directly above the water, and guests can stand on the circuit on the bow of the ship to be closer to the action, even closer than the captain. The new ships have also been given a special visual feature: a blue, undulating finish on the hull.

Prebookings for dream cruises are now possible
Guests interested in their dream cruise can now make a pre-booking; final bookings will be open in late January 2018.

HANSEATIC inspiration:
Expedition Amazon, 25.03 – 11.04.2020 (17 days) from Belem to Iquitos: upstream on the Lower and Upper Amazon with numerous expedition activities and Zodiac landings (via Manaus).