EUROPA 2: Winners of the first acrobatics festival “Artistika of the sea” crowned

Guests on board the luxury ship EUROPA 2, and an international panel of experts presented four awards as part of “Artistika of the sea,” the first international acrobatics festival held at sea. Monsieur Chapeau from Africa won the audience award for his cylinder-centric acrobatics. 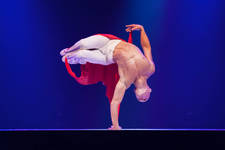 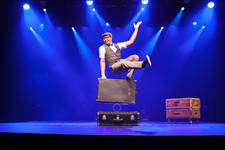 The star panel of Nina Burri (contortionist), Fafa (clown), Oropax (chaos theatre duo) and Peter Shub (clown and director) crowned the Colombian duo Requiem the winners after two evenings of competition. Volker Martins from Oropax explains why the panel chose the pair of flying acrobats, “The duo Requiem delivered a stunning combination of drama, passionate dance and acrobatic skill that we have never seen before, it moved us deeply.”

The panel awarded second place to the handstand expert Ernest Palchykov, who had already made a name for himself as an exceptional acrobat on the international circus and variety entertainment scene. Third place was awarded to the audience favourite Monsieur Chapeau, who also received the coveted audience award, and was humbled by the thunderous applause of onlookers in the on-board theatre.

Next year more selected artists and acrobats will demonstrate their talent on board when the EUROPA 2 hosts the second “Artistika of the sea” festival during an Asia itinerary.

Further information on this cruise can be found at http://www.hl-cruises.com/find-your-cruise/EUX1704