As part of its first scheduled docking, Hapag-Lloyd Cruises’ EUROPA 2 underwent technical maintenance at Blohm + Voss in Hamburg from April 11-24, 2015. At the same time, cosmetic repairs and modernization work were carried out on board: the Sansibar and the Sushi Restaurant Sakura were fully redesigned and the eight family apartments were renovated to be even more family friendly. The full list comprised approximately 700 changes and improvements. The EXPERIENCE.tv SPECIAL “EUROPA 2 – The Refresh” showcases what happened on board during the luxury vessel’s docking period. Click here to see the latest film online: http://www.hl-cruises.com/social-media/experiencetv 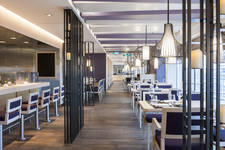 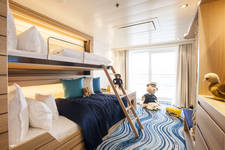 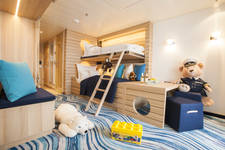 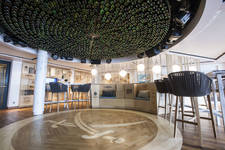 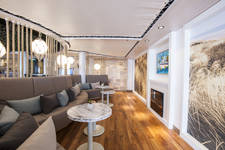 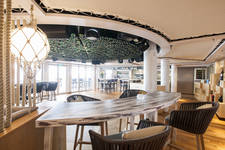 Over 600 specialists, from 80 mostly international companies, spent the last two weeks working on modernizations, cosmetic repairs and various structural elements on the ship. Over 4,500 m2 (15,000 ft.) of new carpet were laid and 2,000 litres (528 lbs.) of paint were applied to the ship. The modernization work focused mainly on the Sansibar. The most popular bar on board was given a new look and is now even more authentic, with wood paneling, room dividers in the form of wine crates with integrated seating, and a “chandelier” consisting of 1,000 wine bottles, giving the Sansibar a true beach bar atmosphere.

After their modernization, the eight family apartments are even more tailored to the needs of families, with a section of each split suite converted especially for children and teenagers, and includes a baby changing table, a children’s bathroom with bathtub, bunk beds (one of which is a Pullman couch), a play area with a painting and games table, and a gaming console (PS4).

At 18:00 hrs. CEST this evening, after spending two weeks in the dock and now sparkling like new, the EUROPA 2 will set off on its eight-day cruise from Hamburg to Hamburg via Rouen/France, Antwerp/Belgium, Ghent/Belgium and Amsterdam/Netherlands.

In January this year, Hapag-Lloyd Cruises launched EXPERIENCE.tv, a new, visual initiative - presented by UK cruise expert Jonathan Beaumont - to create more awareness of the cruise style and concept offered on board the EUROPA 2. The ship has been awarded 5-stars-plus by the Berlitz Cruise Guide 2015. Click here to see the latest film online: http://www.hl-cruises.com/social-media/experiencetv