A first for Antwerp: Hapag-Lloyd Cruises will hold the naming ceremony for its second expedition ship, the HANSEATIC inspiration, on 13 October 2019

Hapag-Lloyd Cruises will hold the naming ceremony for its second expedition ship, the HANSEATIC inspiration, on 13 October 2019 against the backdrop of the Belgian port city of Antwerp. It will be the first time in the city’s history that an ocean-going cruise ship has been christened in Antwerp. The announcement was made at lunchtime today by the CEO of Hapag-Lloyd Cruises, Karl J. Pojer, who spoke to invited representatives of the press and the Deputy Mayor of Antwerp, Koen Kennis. Once she has been christened, the HANSEATIC inspiration will set sail from Antwerp the following day for her 15-day maiden voyage to Tenerife. 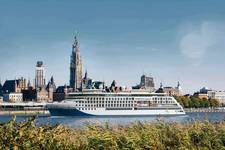 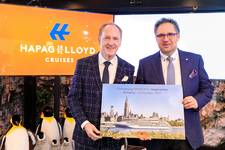 Karl J. Pojer, CEO of Hapag-Lloyd Cruises, said: “We are delighted to be celebrating the launch of our second expedition ship, the HANSEATIC inspiration, against the beautiful backdrop of Antwerp. We have enjoyed many years of excellent collaboration with all of the city’s representatives and our choice of location for the ceremony demonstrates our deep connection with Antwerp. It also underlines our growth strategy for the international market.”

The Hamburg-based company will be putting two new expedition ships into service next year. Hapag-Lloyd Cruises recently announced that the naming ceremony for the HANSEATIC nature – the sister ship of the HANSEATIC inspiration – will be held in Hamburg on 12 April 2019. The two small, manoeuvrable expedition ships feature cutting-edge technology and have the highest ice class for passenger ships (PC6). Their routes will take the ships from one extreme to the other – from cold polar waters to the warm regions of the Amazon. The construction, design and routes of the two new ships revolve around providing a true expedition experience, getting as close to nature as possible and incorporating state-of-the-art equipment to minimise the environmental impact.

The HANSEATIC inspiration will make her 15-day maiden voyage from October 14 to 29 October 2019, sailing from Antwerp to Tenerife with stops in Honfleur, and Guernsey, numerous destinations on the Iberian Peninsula, in Morocco, and in Madeira, with prices starting from € 8,530 ($ 9,810, £ 7,260) per person, cruise-only.